To share your memory on the wall of Tony Barrientez, sign in using one of the following options:

In 2005 Tony found love again and married Matilda Lozano in Las Vegas. Tony and Matilda enjoyed their retirement together. You could often catch them gallivanting across the USA and México spending time with family and friends. When he was home, he loved to watch CNN and he loved watching them Cowboys!

“Tony B” was loved by all, making friends everywhere he went. He had a very kind heart and very generous. Tony was a loving great-grandpa, grandpa, dad, son, brother, uncle, cousin, husband and friend. He was always smiling and laughing even when times were tough and through his pain. Tony’s resilience and strength through the cancer was admirable. He wouldn’t let it rob him of a moment spent with his beloved family and friends.

Tony Barrientez passed away on March 5, 2020 with his family by his side. Those left to cherish his memory are his beloved wife Matilda; his son Tony II (Cassaundra); and daughter Lizzy; his four sisters: Trini, Helen, Josie, Inez (Johnny). Also, too numerous to name - all his beloved family and friends.

Tony was preceded in death by his parents: Francisco and Ricarda; all his brothers: Frank Jr., Johnny, Jimmy, Albert; his sister, Susie. Sadly, his sister Mona has now passed away.

Receive notifications about information and event scheduling for Tony

We encourage you to share your most beloved memories of Tony here, so that the family and other loved ones can always see it. You can upload cherished photographs, or share your favorite stories, and can even comment on those shared by others.

Posted Mar 14, 2020 at 12:30am
Uncle Tony, thanks for the love, laughter and memories. Our prayers are with you Matilda, Tony B and Elizabeth.

Tony and Mom (Mona) your in our hearts forever.

Posted Mar 12, 2020 at 09:37pm
Matilda, I'm so sorry to hear about Tony. You two were the perfect couple. My prayers are with you and the family.
Francine
Comment Share
Share via:
CG

Sorry for your loss. We pray that God provides his loving Grace during these trying time.

Posted Mar 06, 2020 at 04:11pm
The Baylor Scott & White Hospice team would like to extend to you our deepest sympathy. Thank you for allowing us to care for Mr. Barrientez and please know you are in our thoughts and prayers.
Comment Share
Share via: 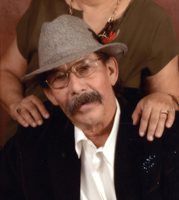