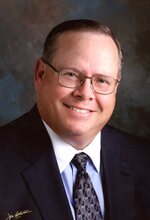 Steven Burney Mullens, 65, of Riesel, TX, passed away on December 18, 2020 after a two week battle with coronavirus.

He was born on February 3, 1955 in Waco, TX to Burney Bradford Mullens and Joyce Aliene Gilbert Mullens. After graduating from Riesel High School in 1973, Steve met the love of his life, Nancy Gail Beatty, at MCC and they married in 1975. The definition of a hard worker, Steve got his first job at 19 years old and thus began his lifelong career in banking. In 1993 he joined the First National Bank of Central Texas. Over the next 27 years he would help the bank soar to new heights, as it expanded to five branches and earned over $21 million in 2019. He retired in February 2020.

He was a physical manifestation of love. He spent as much time as possible during his brief retirement with his family- particularly his grandsons- and loved them with every fiber of his being. He also loved fishing, singing, Lady Bear Basketball, and Baylor football.

Steve touched many, many lives. His kindness, generosity, and happiness were contagious. To simply say he will be missed would be an injustice to him. He will live in the hearts and minds of his loved ones forever.

Flowers may be sent to the Pecan Grove Funeral Home at 3124 N Robinson Dr, Waco, TX 76706. The family will be holding a private graveside service, with a larger celebration of life to be planned after the pandemic.