To share your memory on the wall of Sallye Tucker, sign in using one of the following options:

She married Morris Tucker on February 28, 1947 and together they had seven children. After raising her family, Sallye returned to school to become a nurse and spent many years serving the sick and elderly before retiring. During her retirement years she was called back to work as an aide at Axtell Elementary and spent about ten years working with special needs children.

Sallye was brought up in the Church of Christ and remained faithful throughout her life. Her Christianity was evident in her daily life and to all who met her.

Sallye was preceded in death by her parents, Will and Annie Ballard; her husband, Morris Tucker; daughters, Elna Kay Tucker and Donna Ruth Tucker; and step-son, Dale Corkill.

Sallye was a loving person and a wonderful mother. Over the course of her lifetime, she was a “mother” to many children, accepting everyone with open arms. She was a foster parent to over forty children, some with whom she formed lifelong bonds, like Charity. Sallye also opened her home to several beloved nieces and nephews throughout the years. She will be missed by her family, whom she loved dearly, and the many friends she made throughout her life.

In lieu of flowers, memorials may be made to Brazos Button Club or Providence Hospice Place at St. Catherine's, 6700 Sanger Ave., Waco, TX, 76710
Read Less

Receive notifications about information and event scheduling for Sallye

We encourage you to share your most beloved memories of Sallye here, so that the family and other loved ones can always see it. You can upload cherished photographs, or share your favorite stories, and can even comment on those shared by others.

Nicole Cordova and the Staley Family sent flowers to the family of Sallye Ruth Tucker (Ballard).
Show you care by sending flowers

Flowers were purchased for the family of Sallye Tucker. Send Flowers

Nicole Cordova and the Staley Family

Posted Dec 18, 2019 at 01:37pm
Sallye was a beacon of kindness and humor, and will so be missed. With love, condolences, and the fondest of memories -

Nicole Cordova and the Staley Family purchased flowers for the family of Sallye Tucker. Send Flowers 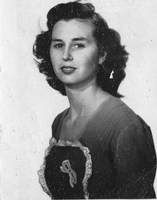