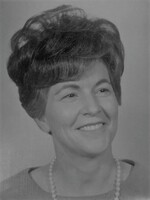 Myrle Guderian-Gilmore, 97, residing at St. Catherines Center of Waco, passed away on Wednesday, December 30th, in the presence of an angel who held her hand as she entered the arms of Jesus.

Born Edna Myrle Moran on September 20th, 1923, to Quincey and Myrtle "Bobbie" Moran in Chilton, Texas, was the 2nd child born into a thriving farming community in Falls County. Quincy, a cotton farmer, and Myrtle, a housewife had already given birth to their first child, Dimple, born 2 years earlier in August of 1921. Soon to follow her brother, Doris "D.P.", born October of 1925, and finally Wilda "Jean", born August of 1927.

Myrle attended North Prairie Elementary. Established in the early 1900's and later recognized as a Texas Historical Marker through the efforts of her and fellow students. Myrle went on to graduate from Chilton ISD in 1940. Though she did many things in her early years from pick cotton to cashier at Sears Roebuck & Co., Myrle resided as Executive Secretary for Stillwell Memorial Residence from 1964-1973 where she went on to become the Administrator until 1981. She also worked at Empire Gas Co. for many years before retiring.

Reggie passed away on October 13th, 1974, leaving her behind two grandchildren William "Shannon" Guderian and Kelli Jean Guderian of Waco.

In 1989, Myrle met Johnnie Gilmore of Waco and was joined in marriage on October 12th, 1990, residing together in Golinda, Texas until moving to St. Elizebeth in Waco to retire from their beloved community and family of Golinda Baptist Church where she remained the oldest surviving member until her passing.

Myrle “Granny " was a vibrant, tenacious, and resilient women who seldom met a stranger and always spoke her mind. An infectious laugh and radiant smile remained poised to welcome anyone into her home. No greater than her love for family, she enjoyed dancing, bowling, traveling, community events, serving others, sewing, and cooking.

She is predeceased by her parents Quincy and Bobbie Moran, sisters Dimple Guderian and Jean Bethurum, first love William Guderian, fore ever loved Johnnie Gilmore, her only maternal children Linda Gayle Green and Reggie Guderian, nieces Sharon and Suzanne Bethurum, her four-legged companion Puddles and a host of friends.

A special Thanks to Pastor Morgan Woodard and family of Golinda Baptist Church, The Staff at St. Catherines of Waco, those who loved her without our knowledge and that angel from hospice Jennifer W.

In lieu of flowers, please consider a donation in Myrle’s name to BCRF.org in honor of her daughter Linda Gayle Green.

Graveside service only will be held on Tuesday, January 5th, 1pm at Cottonwood Cemetery in Lorena, Texas where she will be laid to rest.