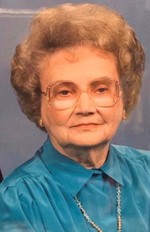 Dora “Mozelle” Bray, 100, of Golinda, TX passed away peacefully on Tuesday, October 6, 2020 just 45 minutes before her 101st birthday. Graveside services will be held at 10:00am, Tuesday, October 13 at Chilton Cemetery, 164 CR 493, in Chilton. The visitation will be 6 to 8 p.m. Monday, October 12 at Pecan Grove Funeral Home, 3124 N. Robinson Drive, Waco.
Mozelle was born in Chilton, TX on October 7, 1919 to Robert and Katie Brewington Wooley. Mozelle graduated from Chilton High School and went on to marry M.G. Bray Jr. on February 17, 1942. Shortly afterwards, M.G. was drafted by the Army to serve in World War II. Mozelle stayed home and paid service to her country by working in an airplane factory in Waco. The couple eventually settled in Jal, New Mexico to raise their two children, Bob and Lynda. Mozelle maintained the household while M.G. worked as an accountant for El Paso Natural Gas for the next 28 years. Once the kids were raised, Mozelle went on to pursue her nursing degree and worked in the hospital until the couple eventually retired back home in Golinda. Mozelle was never one to stay idle for long. She enjoyed gardening, golfing, fishing, cooking, crotchet, quilting, painting, and making porcelain dolls. She adored her children and grandchildren and loved to travel. She spent countless hours serving the Lord as an active member of the Church of Christ in Robinson and never missed an opportunity to bring food to the Golinda Volunteer Fire Department. After suffering a stroke at the age of 84, Mozelle lived the next 16 years in Seguin, TX until her peaceful passing.
Mozelle was preceded in death by her parents and siblings, Jack Wooley and Dorothy Hague and her beloved husband M.G.
She is survived by her son Bob (Beth) Bray of Seguin, TX and Lynda (Kenneth) Raybon of Farmington, NM; grandchildren, Jeff (Kelly) Bray of Bosqueville, TX, Robin (Bill) Wood of Allen, TX, Clay Raybon of Farmington, NM, Cari Fontaine of Gilbert, AZ, and Cole (Krystal) Raybon of Cypress, TX; and great-grandchildren, Brandon, Riley, Jaxson, Ashlyn, Alyssa, Paige, Cameron, McKenna, Lauryn, Jayden, Daniel, Easton, and Aubrie.