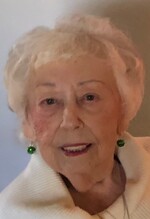 Mary Ruth Ostrom passed into the loving arms of her Lord and Savior on Saturday, January 16, 2021, surrounded by her loved ones. Graveside services will be held at 1:00 p.m. Friday, January 22, 2021 at Waco Memorial Park under the direction of pastors Cary Killough and David Cozart.

Mary Ruth Hunton was born September 21, 1925, in Thorndale, Texas, to William C. and Flossie Hunton. She lived her entire life in and around Waco and was a proud member of the Waco High School Class of 1943. On August 12, 1944 Mary married the love of her life, Paul Ostrom, and they were together just shy of 50 years when Paul passed away on March 6, 1994. In 1997, she married Glenn Argabright and he proceeded her in death on December 10, 2000. Mary then married Allen Schmedthorst on April 10, 2002 and they enjoyed 13 years together until his passing in June 2015. She was blessed with three men who loved her dearly and spoiled her tremendously.

After Mary and Paul married they were blessed with three children: Bill, Steve and Penny. She worked in downtown Waco for a period of time and was a survivor of the Waco tornado of 1953. She continued her career with the Veteran's Administration Regional Office and VA Hospital for 30+ years serving in the Waco and Marlin locations. Following retirement, Mary and Paul both volunteered with Providence Hospital, Mary in Out-Patient Services and Paul in the Cath Lab. They so enjoyed being able to serve in this capacity. In 2005, Mary was awarded with 23 years of voluntary service. During these years, she was also on the Board of Directors for Member's Choice Credit Union and loved traveling to San Antonio and other locations for annual meetings. Mary and Paul were members of North Waco Baptist Church and First Baptist Woodway for over 30 years combined and later joined Meadowbrook Baptist Church and served there for a number of years. While married to Allen, they moved their membership to Western Heights Baptist Church and following his death, she moved her membership back to Meadowbrook, where she remained faithful until her death.
The family would like to thank multiple caregivers from Right at Home for their loving care of Mom over the years and most especially, Peggy Baggett, for her love and dedication to caring for their Mom for 5 ½ years. We love you Peggy.

Mary was proceeded in death by her parents, brother Doyle F. Hunton, husbands Paul, Glenn and Allen, and son Bill Ostrom. Left to cherish her memory, she is survived by her son, Steve Ostrom and wife Fran of Robinson, daughter Penny Ostrom, also of Robinson, and daughter-in-law D'Ann Ostrom, of Austin. She is also survived by special family friend and daughter from another mother, Deanna French. Mary was blessed with and loved her four granddaughters dearly, Erin Garrett and Kristin McGuire of Austin, Paige Brooks (husband Wesley) of Woodway, and Lindsey Ostrom of Robinson. She also had four great­ grandchildren that she adored, Josie and Caleb Brooks, along with Lucas Garrett and Scarlett McGuire.
Mary's mind and body are now renewed. Memorials may be made to Meadowbrook Baptist Church in Robinson or the charity of one's choice. Until we see you again, "we love you the Most-est Momma"!