To share your memory on the wall of Joyce Mullens, sign in using one of the following options:

Provide comfort for the family of Joyce Mullens with a meaningful gesture of sympathy.

Receive notifications about information and event scheduling for Joyce

We encourage you to share your most beloved memories of Joyce here, so that the family and other loved ones can always see it. You can upload cherished photographs, or share your favorite stories, and can even comment on those shared by others.

Posted Apr 07, 2020 at 01:16am
Cindy and family, so sorry to hear of your dear mother’s passing. I pray God give you comfort my friend. Lifting prayers for the family too. Sad to hear this news, God bless you all. Love Jan Chandler
Comment Share
Share via:
PK

Posted Apr 04, 2020 at 10:10am
Our thoughts and prayers are with the family. Joyce's beautiful smile and her laughter is always what We will remember about her.
Paula and Mollie
Comment Share
Share via:
JL

Posted Apr 03, 2020 at 06:46pm
Our deepest condolences to the Mullins family. We thought the world of Joyce and Burney in that we purchased their old home when they moved to their new one. Worked with Joyce on the park improvements to make it a better place for the citizens of Riesel. She will definitely be remembered in Riesel. God bless.......
Comment Share
Share via:
PT

Posted Apr 02, 2020 at 04:43pm
Steve,
I'm so sorry for your loss. Praying for you and your family during this difficult time.
Penny Tanner
Comment Share
Share via:
MP

Cindy and family so deeply sorry for your loss. My thoughts and prayers are with you and your family. Your mother was beautiful Love, Martha Patterson 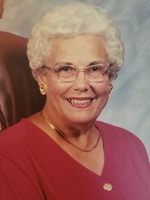