To share your memory on the wall of Jerry Robinett, sign in using one of the following options:

Jerry was born April 19, 1942 to Tommie and Mable (Andrews) Robinett in Groesbeck, Texas. After high school Jerry joined the Army from July 1960 until August 1963. Driving was a passion of his (he had a professional card in his wallet) he worked for Central Freight Lines, Equipment Depot, and Allen Samuels. Jerry made many friends through these industries. His biggest passion was fishing. You could find him at the lake or coast with friends, his brother and nephew, his son-in-law or his grandchildren on any given day; it was good therapy and a source for many of his “tall tales.”

Jerry is survived by his wife, Joyce Robinett; two daughters, Rhonda Broughton and husband Randy of McGregor, Rene Duffy of Waco; grandchildren, Mandy Broughton (Chris Valmores), Micah Broughton, Grant Duffy, Dakota Clark (Adam Blye), Jessie Clark. He is also survived by his two brothers, Jesse Robinett and Gene Robinett, both of Groesbeck; along with his fur babies that he loved very much.

In lieu of flowers, the family welcomes donations to a charity of your choosing in his name.
Read Less

Receive notifications about information and event scheduling for Jerry

We encourage you to share your most beloved memories of Jerry here, so that the family and other loved ones can always see it. You can upload cherished photographs, or share your favorite stories, and can even comment on those shared by others.

Jake, Cydney and Carter Cockerill and Lamar Advertising of Temple sent flowers to the family of Jerry Lynn Robinett.
Show you care by sending flowers

Posted Jun 03, 2020 at 01:42pm
To Joyce, Rhonda, Rene, Grant, Jesse, and the rest of Jerry's Family and many, many friends!! Jerry and I go back a long way!! Mine and his early days of living in McGregor, when he was driving for Central Freight, and I was working at Mars, and we had many great times talking on the citizen's band radios!! And i worked with Joyce and Rene for a number of years!! So, all of these people were more like Family to me!! I'm very sorry to read/see about Jerry's passing!! And i have had all of you on my mind for some time the last many months!! But, I mis-placed the phone number!! So, I apologize for this!! Nobody could ever find a greater guy/man/friend that Jerry Robinett!!! And, I have been truly blessed to have had Jerry and his Family in my life!! GOD bless you Jerry!! And may GOD bless 'each' of these people that I have listed to start with!! Please remember all of the wonderful/good times that we have shared with Jerry,, and together!! Rest-In-Peace Jerry!! And we will see you again in Heaven someday!! And he will be greatly missed by 'all' of us!!! And, I'm sorry that I will not be able to attend any of the Services. Ronny Bredemeyer(formerly of McGregor 1969-1989, Worked for Mars 1976 -2001[retired)!! GOD be with all of you in the days/weeks/months/years to come!!
Comment Share
Share via:
ES

Posted May 29, 2020 at 12:36pm
I met Jerry about a year ago when I started driving cars for Allen Samuels here in Waco. Jerry was our driver coordinator. Every trip I took with him was very enjoyable. Wish we could have had more trips together. He will be missed.
Comment Share
Share via:
SH

Posted May 28, 2020 at 05:03pm
Dear Family of Jerry Robinett,
The Bluebonnet Hospice Family is thinking of you and keeping you in our prayers as you face this difficult time and the days ahead.
May caring concern and condolences carry each of you through day by day.
Sincerely,
The Owners and Staff of Bluebonnet Health Services (Hospice)

Lamar Advertising of Temple purchased flowers and planted a memorial tree for the family of Jerry Robinett. Send Flowers 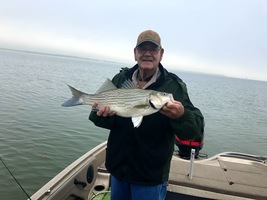