To share your memory on the wall of Jean Dawson, sign in using one of the following options:

Provide comfort for the family of Jean Dawson with a meaningful gesture of sympathy.

Print
Jean Peebles Dawson, whose age we still are not allowed to mention, of Woodway, went to be with her Heavenly Father on Monday, August 12, 2019. The family will receive visitors from 6-8pm Friday August 16, at Pecan Grove Funeral Home, 3124 Robinson D... Read More
Jean Peebles Dawson, whose age we still are not allowed to mention, of Woodway, went to be with her Heavenly Father on Monday, August 12, 2019. The family will receive visitors from 6-8pm Friday August 16, at Pecan Grove Funeral Home, 3124 Robinson Dr., Waco.
Jean was born and reared in Daytona Beach, Florida. When she was 16 years old, she came to Texas to visit her sister, and on a whim, she applied for and obtained employment at Ft. Hood in Killeen, Texas. Eventually, she met and married a young man from Waco, Texas. She and her husband, Jack Peebles, had a daughter and a son. When the children were older, Jean decided to start taking classes at McLennan Community College. She earned an Associate of Arts Degree from MCC, entered Baylor University the following semester and graduated summa cum laude in 1972. That same year, she started her teaching career at University High School in Waco. She first taught English, later transferring to the Business Department; she went on to earn a Master of Science Degree from Baylor University.
She loved learning; always taking many courses and classes during the summer and at night. While teaching, Jean was involved in many extracurricular activities: sponsoring the Rotary Key Club, the cheerleaders’ organization, coaching and sponsoring UIL (University Interscholastic League) events each spring, with her students winning many district, regional and state events. Affectionately known as "Mean Jean", she loved teaching and she loved her students. In giving career advice to her students, she advised them to carefully decide what they truly loved doing and to follow something that they would love to get up and go to, as she did. In 1985, Jean transferred to Midway High School, and was there until ill health forced her resignation in 2008. When she recovered, she taught at Baylor University for a short period.
Second to teaching, the thing that she loved most was traveling. During Christmas holidays, Spring Breaks, summer vacations, whenever she had time off, she traveled. Her travel partner was primarily her daughter, and together they visited Hawaii three or four times, England three times, Scotland, France, Germany, Italy, Holland, Hong Kong, Versaille and many others. They also made automobile trips through most of the United States and took cruises, their favorite of which was the Alaskan.
Dale Dawson and Jean Peebles married in 1987. When Jean moved to a neighborhood where there were many feral cats, she was appalled to see these cats starving, freezing, and being hit by cars. She put a “Have a Heart” cage on her patio. Almost every morning there was a trapped cat, which she took to the vet to be neutered or spayed and vaccinated; she stopped counting at 22.
Jean enjoyed socializing. She belonged to Four Seasons Garden Club, New Comers and Neighbors, Red Hats Society and Beta Sigma Phi Sorority.
Jean was preceded in death by her mother and father, William Coleman and Elise Autry Eason; brother, William Myron Eason and wife Pat; sister, Mary Elizabeth and husband James Wright Merry; sister, Mildred Fields; brother, Lloyd Eason, and foster daughter and dear friend, Evelyn Mary McAllister, who passed after a five year battle with breast cancer.
Survivors include her daughter, Sharon Elyse Peebles and companion LeeAnn Coffen; son, Michael Edward Peebles and wife Lorie; granddaughter, Ashley Michelle Peebles; grandson, Michael Justin Peebles and wife Toni; granddaughter, Nancy Deitrich Peebles; step-grandson, Donnie Gideon; sister Carole Chandler and husband Lew; sister-in-law, Beth Eason; two great-grandchildren, Paige and Cameron Peebles; extended family including, dearly loved Cathy Bryant, Joe Peebles and wife Vickie, Malissa Tate and husband Brandon, and their children, Makenzie, Abygail and Jackson Tate, Matt Bryant, and many nephews, nieces, and cousins. Jean also leaves behind many dear and treasured friends.
A special thank you to Pastor Ken Riley and wife Theresa and Hewitt Community Church. The blessings you brought to us are many, including a particularly bright and memorable evening of Christmas carols that brought her joy for months to come. To Sophia and Samantha Marton: the love you showed Jean meant the world; you will always have a place in our hearts.
Thank you does not even begin to express what we would like to say to Kay Gann and all of the team at Providence Hospice for their loving and compassionate care of Jean and those who loved her so.
In lieu of flowers, donations are welcomed to Providence Hospice, which can be done online at www.chot.org.
Read Less

Donations are being accepted for: Providence Hospice.

We encourage you to share your most beloved memories of Jean here, so that the family and other loved ones can always see it. You can upload cherished photographs, or share your favorite stories, and can even comment on those shared by others.

Posted Sep 09, 2019 at 01:10am
Sharon, I just found out about Jean. I’m so sorry and very sad that I will never see her again. She was an exceptional person, so genuine, so fun & pleasant, and one of a kind. My sincere condolences to you & your family. Lin Blansit, Austin
Comment Share
Share via:
D

Posted Aug 31, 2019 at 06:29pm
I remember her so fondly and she was my favorite high school teacher. She was kind and encouraging. She will always hold a special place in my heart.
Comment Share
Share via:
KH

Posted Aug 19, 2019 at 10:47am
I truly believe that God sends the people you need to meet into your life, even if it's for a short time. Meeting Mrs. Dawson, Ashley, and all your friends and family made a tremendous impact on me. What a priviledge to get to know her: precious does not begin to describe her! Thank you for the honor of being able to hold sweet memories of her and the great care you provided for her. As I told you a hundred times, your care and the environment you provided for her were perfect. Our love and prayers will be with you always.

Posted Aug 17, 2019 at 12:02pm
Mrs. Peebles was my homeroom teacher at University High School. She had to be the sweetest teacher in the school. She was so kind. May she rest in peace.
Comment Share
Share via:
JJ

Posted Aug 15, 2019 at 10:48am
Mrs. Peebles, as I knew her, was my teacher at University High School. She was such a beautiful lady and soft spoken. I remember her telling me at the end of the year that she thought I was going to be a problem student but that she was wrong and I turned out to be a great student! lol She was a wonderful teacher and I was blessed to be in her class. She was always one of my favorites. Prayers for her family, I know she has a special place in Heaven.
Judy Kent Jones
Comment Share
Share via: 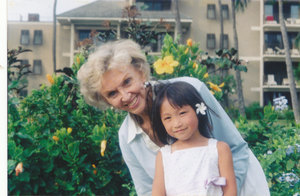