To share your memory on the wall of Glendine Sears, sign in using one of the following options:

Born in Richwood, W. Virginia, Glendine moved to New York where she raised her three children, Sandie, Charlotte, and Chuck. In 1983, she retired from New York State Hospital where she worked as a mental hygiene therapy aid and moved to Texas where she resided until her passing.

Receive notifications about information and event scheduling for Glendine

We encourage you to share your most beloved memories of Glendine here, so that the family and other loved ones can always see it. You can upload cherished photographs, or share your favorite stories, and can even comment on those shared by others.

Posted Mar 03, 2020 at 01:31pm
Please accept our most heartfelt sympathies for your loss... Our thoughts are with you and your family during this difficult time.

Posted Mar 03, 2020 at 10:37am
"Aunt Glendine"will be missed and will remain in our hearts forever. Love Vickie, Kenny, and Family

Flowers were purchased for the family of Glendine Sears. Send Flowers 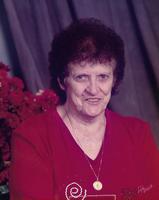