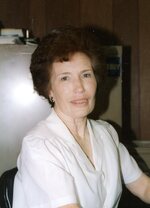 Geneva Shaw, 86, of Robinson, TX, who was a loving mother and grandmother passed away December 18, 2020 at Matlock Senior Care in Mansfield, TX. Graveside Memorial Services will be 2 p.m. Tuesday, December 22, 2020 at Waco Memorial Park, where she will be laid to rest next to her husband of 51 years, Denzil H. Shaw.

Geneva was born on October 24, 1934 in Woodbury, TX to parents Tom Brown and Lena Mae Upchurch. She married Denzil Hoyt Shaw on August 22, 1952 in Whitney, TX. They moved to Waco in 1956 and had three children. They enjoyed traveling, especially trips to Las Vegas with family and friends. Her favorite activities were sewing, bingo, spending time with grandkids, attending church and working in her yard.

Over her lifetime she was employed at Levine’s Dept Store, Waco News Tribune Herald, and retired after many years from Walter J. Pearce Real Estate where she worked as office manager. She was a member of Cornerstone Baptist Church in Robinson, TX, where they resided for over 40 years.

She was preceded in death by her parents, two brothers Morris Earl Brown and Carl Lee Brown and her husband, Denzil who died on June 9, 2003.