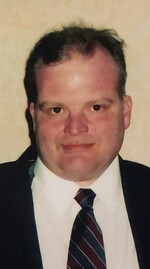 David William Carr passed away peacefully on Sunday, December 27, 2020 in Garland, Texas. David was born April 30, 1965 to Robert Carr and Sheron Davis. David was an avid history enthusiast with a particular interest in the European Theater of World War II, in which both of his grandfathers served the United States. Throughout his life David enjoyed working on muscle cars with friends, shooting firearms, and participating in WWII reenactments. David spent much of his working life in the telephone system repair business.

David was preceded in death by his father Robert Carr and mother Sheron Cook.
He is survived by his step father Wilbur Cook of Lorena, brother Nicholas Cook and wife Hallie of Waco, uncle Bill Davis and wife Debbie of Providence, Kentucky, and aunt Deanne Schilling and husband Cliff of Jacksonville, Florida. Special thanks are in order to David’s lifelong friend John Potter and wife Laureen of Garland, Texas for their hospitality.