To share your memory on the wall of Charles Saffle, sign in using one of the following options:

Charles was born on the family farm on October 25, 1932 to Lucille and Charles Clifton Saffle. He was the oldest of five sons. Charles graduated from Waco Tech in 1950. Charles married the love of his life, Joyce Watson, of Waco, on October 23, 1953. They were married for 62 years before her death on December 13, 2015. Charles joined the U.S. Army on May 18, 1955 and served until May 17, 1957. His MOS was microwave radio repair. He started his civilian federal government career with the Federal Aviation Agency (FAA) in 1962 as an electronic engineer. He helped maintain the electronic equipment including the radar that air traffic controllers used. Charles retired from the FAA in 1995 and returned to Robinson to operate Saffle’s Nursery.

He was preceded in death by his parents; brother, Thomas Saffle; granddaughter, Angela Jenogan; and great-grandson, Joseph Jenogan.

Receive notifications about information and event scheduling for Charles

We encourage you to share your most beloved memories of Charles here, so that the family and other loved ones can always see it. You can upload cherished photographs, or share your favorite stories, and can even comment on those shared by others.

Guaranteed hand delivery by a local florist
A

Posted Jun 16, 2020 at 10:45am
I thought do much of Mr Saffle. He was a Special person. He had a great life and I know he will be missed but he is in a better place now. Prayers to you and your family.
Comment Share
Share via:
SS

Posted Jun 15, 2020 at 08:55pm
The Saffles in Columbia, Maryland (the younger ones) wish we could be there for the service. We will be thinking of Uncle Charles and love you all.

Posted Jun 15, 2020 at 12:22pm
Bob Saffle
I was 9 years younger than Charles, and don't remember a lot of over-lapping activities. Charles did tell me and my wife, Donna, a story of his childhood when we visited him a few years ago.

As Charles told it, he was always inquisitive and willing to try hands-on experiments. He liked to order somewhat explosive powders from the Popular Mechanics back page advertisements. He would treat his Mom and Dad, and brothers, to colorful fireworks displays using the powders. All was well and good until he expanded into using black powder to make small rockets, or fire crackers. One day, without realizing the power of the black powder, he packed too much into a cylinder and lit it off. There was a huge explosion that brought my Dad running from a distant field. Charles wasn't seriously hurt (luckily!), but that was the end of his explosive powder experiments. At least until he was grown and started loading his own gun ammunition cartridges!

Posted Jun 14, 2020 at 04:36pm
Charlotte,
Our sincerest condolences to you in the loss of your daddy. You are in our thoughts and prayers.
Donna , Doris Azbell, and Helen Crocker. 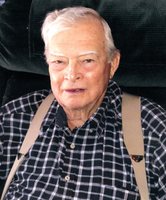 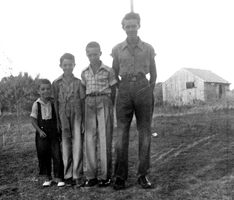 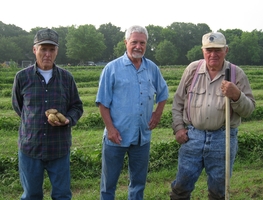 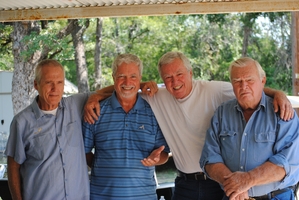