To share your memory on the wall of Carol Dieterich, sign in using one of the following options:

Provide comfort for the family of Carol Dieterich with a meaningful gesture of sympathy.

Print
Carol Ann Dieterich passed away on Monday afternoon April 27, 2020 at the age of 71. She was a cancer survivor, who had battled Crohn’s disease for many years.

Carol, daughter of Henry and Mamie Wegwerth, was raised in Riesel, TX. She ... Read More
Carol Ann Dieterich passed away on Monday afternoon April 27, 2020 at the age of 71. She was a cancer survivor, who had battled Crohn’s disease for many years.

Carol, daughter of Henry and Mamie Wegwerth, was raised in Riesel, TX. She married and raised her two children in Riesel, but she never met a stranger anywhere she went. Through her lifetime, she worked for the VA in Waco, for the US Postal Service, for the Hobby Unit of the TDJC, and lastly as a PEIMS clerk for TYC in Marlin and in Mart. Carol played the organ for Frieden’s UCC Church for over 40 years and blessed many couples by playing at their wedding ceremonies. She was active and a leader in Riesel HS Band Boosters and the McLennan County Aggie Moms Club in support of her two children. She was a lover of music, her large family and many dear friends, and a good time.

Carol was preceded in death by her mother and father.

A private graveside service will be held for her immediate family at St. Paul UCC Cemetery. A memorial service to celebrate Carol’s life will be scheduled at a later date.

The family would like to thank the staff of Kindred Hospice Austin for their kind care and support. Memorial donations may be made to St. Paul UCC Church, PO Box 534, Marlin, TX 76661.
Read Less

Receive notifications about information and event scheduling for Carol

We encourage you to share your most beloved memories of Carol here, so that the family and other loved ones can always see it. You can upload cherished photographs, or share your favorite stories, and can even comment on those shared by others.

Mary Perez, Bob and Karen Bates, and others have sent flowers to the family of Carol Ann Dieterich (Wegwerth).
Show you care by sending flowers

Posted May 09, 2020 at 06:35pm
My deepest sympathy to Carol’s family. She has been on my mind lately and will be missed. Her warm smile and big hugs will be missed. Tina Schraeder Alexander
Comment Share
Share via:
AV

Posted May 02, 2020 at 02:00pm
My deepest sympathy to Carol's family. We went to Friedens Church together and Darla, Roy and I graduated same class and I considered them my beat friends. After Carol graduated and went to work at the Waco Tribune, I was still single and we shared an apartment for a year. Great memories of good times and our time spent with church activities. There is comfort in knowing she is home with our Savior.
Comment Share
Share via:
MP

Posted May 01, 2020 at 04:53pm
My deepest condolences to Carol's family. I met Carol in 2008 while working at TYC together, she was at Mart and I was at Brownwood. From Day 1, we clicked and we never let go of one another. I always told her she was the older version of me. I'll miss all the laughs and great times together. May God rest her soul and bring her family peace and comfort during this time. I love you Carol!
Comment Share
Share via:
MP

Posted May 01, 2020 at 03:47pm
Carol will remain in my heart forever, she was very special to me. I pray the love of God comforts your family.

Posted May 01, 2020 at 02:02pm
Brett & Cassie and your families - I am so sorry for your pain and heartache. Prayers that the love of God and the family and friends HE has surrounded you with will bring you peace and comfort during this difficult time. I am so happy we got to meet your mom and have those memories of her. Love and hugs to you all, 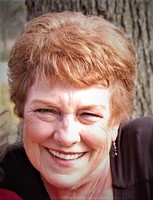