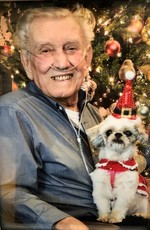 Walter Nyander 86, of Waco, passed peacefully on January 31, 2019 at Heartis Retirement Community. Funeral Services will be 10:00 a.m. Saturday, February 2, at Pecan Grove Funeral Home, 3124 Robinson Drive, Waco, with Pastor Thomas Aguilar officiating. Burial will follow at China Spring Cemetery, China Spring, TX.
Walter was born May 22, 1932 in Galveston, TX, to Oscar and Hilda Doerr Nyander. He relocated with his family to Waco at an early age. Walter attended Waco Tech High School and served his country by joining the Navy during the Korean War. Upon returning home, he began his 50 plus year career at the Waco Tribune Herald after carrying two paper routes as a young boy and working in the mail room, even after retirement. He believed in hard work and a job worth doing was a job well done. Walter loved tending to his cows, talking to people and loved dancing even in later years. He and his family enjoyed their time traveling, camping and fishing. Walter in his later years was fond of his little dog, Bonnie and enjoyed taking her to visit his friends at Heartis. Walter lovingly called Bonnie his therapy dog.
Walter was preceded in death by his wife of 38 years, Doris Pope Nyander; his parents; his daughter Tracy Nyander; and his sister Doris Nyander Wallis.
Walter is survived by his daughter Sherry Weber and husband Brian of Austin; son, David Nyander of Mart; step-sons, Joe Pope and wife Pam, of China Spring; Wade Pope and wife Rae of Axtell, Chris Pope of Lott, and Tim Pope and wife Sandra of China Spring; sister, Darlene Smith, numerous grandchildren, great-grandchildren, nieces and nephews, his many friends at Heartis Retirement Community of Waco; and his beloved dog Bonneit Nicole (Bonnie). Walter was a very devoted husband, father, and grandfather and will be missed.
The family wishes to thank the staff at Heartis Retirement Community of Waco for their care and concern they have provided for Walter; along with Reliable Home Health and Texas Home Health Hospice.