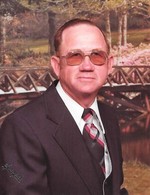 Douglas C. Brown, 93, of Robinson, passed away Sunday, January 14, 2018. Funeral services will be 1:00 p.m., Friday, Jan. 19, at Pecan Grove Funeral Home, 3124 Robinson Drive, Waco, with Dr. Cary Killough officiating. Burial will follow at Waco Memorial Park. The family will receive visitors 6 – 8:00 p.m., Thursday, Jan. 18, at Meadowbrook Baptist Church, 1207 N. Old Robinson Road, Waco.
Douglas was born August 21, 1924, in rural McLennan County, to Claude and Esther Garrett Brown. He was a World War II combat veteran and was awarded the Purple Heart. Douglas worked at the Waco VA Hospital as an aid for 34 years. He was a faithful member of the Robinson Volunteer Fire Department for 45 years.
Douglas was preceded in death by his wife, Mary Brown; his parents; sisters, Margaret Kuhn and Hazel Brown; and a grandson, Joshua Ryan Brown.
Douglas is survived by his sons Gary Brown and wife Shirley, and Michael Brown and wife Diane; grandchildren, Jeff Brown and fiancé Meredith, Shelley Brown, and Jennifer Ogilvie and husband Landon; along with seven great-grandchildren.