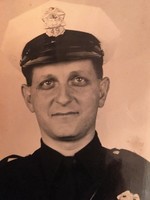 Carlton Lee Fisher, 85 of Waco, Texas went to be with his Lord and Savior on December 23, 2017. Visitation will be on Wednesday, December 27, 2017 from 5pm-7pm at Pecan Grove funeral home, 3124 N. Robinson Dr., Waco, Texas. Funeral service will be Thursday, December 28, 2017 at 10am at First Baptist of Dawson, 407 N. Main St., Dawson, Texas with Pastor Steve Burleson officiating. Burial to follow at Dresden Cemetery.
Carl was born in Kerens, Texas to Reverend Frank and Myrtle Fisher. He graduated high school in 1950 from Evant High School. He attended Baylor University and served in the Air Force. He was Assistant Manager for H.E.B. in Waco where he met and married the love of his life, Dell. He joined the Waco Police Department in 1964 and retired as sergeant after 25 years of service. Carl was a carpenter by hobby. He built a second home for his family, “The Cabin” where he and his beloved children and grandchildren spent many weekends and holidays. “Pa,” as he was known in the family was always telling stories and loved to tell jokes. He was a devoted father and grandfather.
Carl was preceded in death by his parents, five brothers and two sisters.
Carl is survived by his wife of 57 years, Dell Fisher of Waco; son Steve Putman and wife June of Emmett, Texas; daughter Vicky Conaway and husband Russell of Hewitt, Texas; son Carlton Fisher, Jr. of Waco, Texas; granddaughters Sharon Burleson and husband Steve of Dawson, Texas and Karen Boyd and husband Alan of China Spring, Texas; grandsons Troy Horn and wife Cody of Dawson, Texas and Dustin Horn and wife Joslyn of Woodway, Texas. Carl is also survived by 10 great-grandchildren and three great-great-grandchildren.
Pallbearers will be Troy Horn, Dustin Horn, Josh Burleson, Elijah Burleson, Joe Reed and Chuck Lambert. Honorary Pallbearers will be Alan Boyd and Harold Steig.
The family would like to invite friends and loved ones to join them after the services for a time of fellowship at First Baptist Church of Dawson in the Family Life Center.