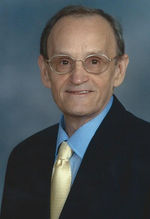 James “Jim” Murphree of Robinson passed away Tuesday, October 11, 2016, at the age of 74. Memorial visitation will be 6 to 8 P.M. Monday October 17, 2016, in the chapel of Pecan Grove Funeral Home. Graveside memorial service and inurnment will be 10:00 AM Tuesday October 18, 2016, at Waco Memorial Park under the direction of Pecan Grove Funeral Home with Father Rakshaganathan Selvarai officiating.
Mr. Murphree was born Sept. 5, 1942 in Waco, Texas. After graduating from Waco High School, he joined the U.S. Army. After completing his military duty, he moved to Dallas to start his professional career in insurance finance. He retired after completing 30 years as president of the same company. Due to health reasons, he returned to his hometown.
James is preceded in death by his parents, Willia F. (Buster) Murphree and Lee Murphree Abel and his sister Shirley R. VanDeilen.
Survivors include a son, Stephen F. Murphree of Arlington; two grandsons, Sheldon F. Murphree of Robinson, Spence E. Murphree of Arlington; a great granddaughter, Rose Murphree; a sister, Delores Wooley Rowe of Troy; step-father, Raymond Abel, who was also his best friend. He also leaves behind five nephews, Billy W. Wooley and wife Rhonda, Donald R. Wooley and wife Bea, Kenny Wenaas and wife Cher, Ronnie Wenaas and wife Shirley and Rickie Wenaas. Two nieces, Pamela Mige and husband Marty, Brenda Ary and husband Grady along with many great nieces, nephews and friends.